The space in front of the station has been formed after the bombings of the 2nd World War. The urban block in front of the former station building became an empty place after the disposal of the ruins. An environmentally extraneous park has been created that is unused until today. Our goal with the new construction was to narrow the facades and to keep the pedestrian congestions near the city centre. The point of the concept is to make the intermodal centre to be the other end of the Piac Street – that transforms to a long pedestrian area – through a southern gate element.

The second part of the concept is to bring the section of main road 4 before the station under the surface. That makes it possible to organize the local and long-distance bus lines directly to the underpass floor of the station. The current station building contains serious financial and architectural value. Unfortunately its operator has let the building to go to ruin, but the old photos prove that it highly emerged from the Hungarian architectural culture of the 60s. So we have integrated that into the new construction. 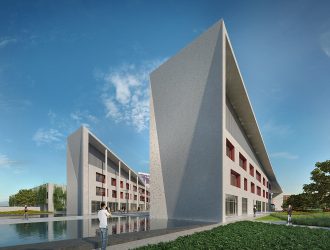